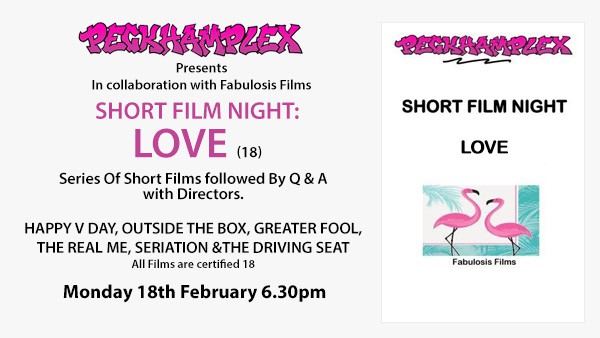 Selection of short films followed by Q&A with the directors.

Set in modern day Singapore, Dayna "Day" Tan is a 27-year-old lawyer looking to lose her virginity on her own terms. She might be smart but she can't seem to outsmart herself.

OUTSIDE THE BOX
by Katherine Hearst, UK production, BBC Four.

A bird desperately wants to escape his lonely work in order to find the one he loves again.

Tommy is a romantic at heart but his love life just doesn't seem to take off. So he finally visits Stella, a once renowned beautiful and empowering "love-doctor", only to find a now alcoholic, dishevelled and cynical woman.

THE REAL ME
by Guy Simmonds, UK production.

The Real Me is a forbidden love story between a Greek girl called Penny and a Turkish girl called Shaz. Despite their strict cultural differences, they are best friends. Penny is desperately in love with the Shaz but is scared to reveal her true feelings in fear of losing her best friend.

An entire relationship viewed non-sequentially in one continuous take.

One Saturday morning, a middle aged couple decide to make love in their car in the driveway to put a spark back in their marriage – only to find it has rather the opposite effect.